bloomingdales.com
$99.00
See it
Add to wishlistAdded to wishlistRemoved from wishlist 0
Tag: Meat Thermometer
Last updated on 27 July 2021 2:36 am

The Meater+ has an extended range of up to 165 feet unlike the Meater probe, which was limited in range to approximately 30 feet on open grills or ceramics and just 10 feet if in a metal grill with the lid closed. The added range is a big plus.

It is a wireless probe that transmits via Bluetooth to an app in your smartphone, with no wires to be seen. The biggest benefit of this is it makes it possible to use a leave-in, remote monitoring thermometer during your rotisserie cooking. Of course, it also means no trail of wires to catch and snag on tools while you are cooking, no cables that will bend, fray, break and eventually fail. True wireless is win-win.

The Meater+ probe connects to its charging block, which is also a Bluetooth repeater extending up to 50 m. The block can connect to your phone up to 50 m away. An extra feature such as the ability to also connect to the cloud is available for users, so you can monitor and view your cooking from anywhere in the world, so long you have an internet connection.

The operating app, available to IOS and android users, is highly intuitive and feature-packed. It has settings for users to choose the type of meat (pork, beef, lamb) and then the exact cut (steak, rib, roast, etc.). Users can also set their personalized desired internal temperature for doneness level.

Note: In general, the Meater+ Wireless Meat Thermometer is a highly functional, intuitive, good-looking bit of kitchen accessory that works excellently. You can do no wrong owning one of these beauties.

Buy it on Amazon

Which Meat Thermometer Is Right for Me

Picking a cooking thermometer is a tricky business. Lots of products offer great and amazing features. Moreover, some offer a lot less than they are advertised. Naturally processing such large volumes of information about different thermometers might be straining on buyers. Hence, we have created a streamlined list to help anyone who loves a perfectly cooked meal. 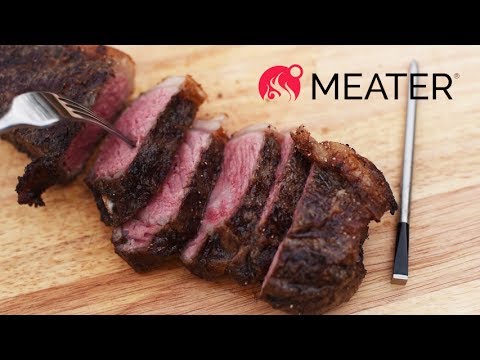